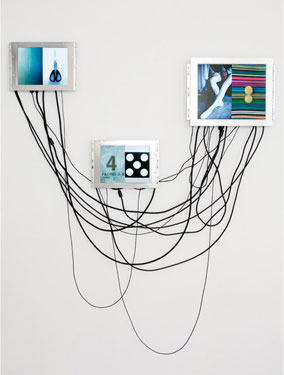 As I’m coming to realise the inexorable rise of all things interactive means I must embrace programming be that by learning some (I’ve signed up for the Processing course that’s running alongside this exhibition) or collaborating, or both.

Regardless it’s quite a milestone that the V&A should host an exhibition full of pieces entirely the products of code.

I happened to visit on a Friday night, the same evening as their masked ball, an event rather more fitting for the splendour of the building that is the V&A.

Anyway, I stuck to my mission and pushed my way through the frocks and head-dresses to the ‘computer programming’ exhibition (albeit thinking ‘oh god, what am I doing?’) But it was worth it, better than I’d feared, good enough that I no longer felt a stronger pull to join the party outside.

I’m still dubious about using code to recreate natural phenomena – wind moving a tree, leaves falling, why not let nature just get on with doing that which it does really quite well already. And there’s a design aesthetic missing – it often felt like the computer had been left to do the design (which it probably had).

But more to the point, and more overwhelming, was people’s genuine engagement with the exhibits and the variety on display within a compact exhibition. The curators had judged it well for an exhibition that could have alienated people, or just have been sidelined as a joke. My favourite piece is the one pictured above, a live clock composed of found images submitted by people through the internet.

‘Decode’ didn’t answer any questions but it serve to make the buzz that is around digital technology buzz a little louder, further, wider. Long gone are the times that programming is synonymous with nerds. It’s mainstream and exciting and going to leave us behind if we don’t embrace it, learn it, use it, collaborate.

Tags: decode, developers, exhibition, V and A
← The passion behind football
Art and infographics →