I went along to the Editorial Design Organisation’s iPad review evening last night which was good given I haven’t really seen or used one much. Some notes below if you’re interested.

Jon Hill, design editor for The Times, spoke about how they developed their app using Agile methods, that is to say get something out there and then bit by bit tackle aspects of it that need improving, tweaking, adding. Still work in progress, but a good app already nonetheless. A benefit of the iPad is you can retain control over typography and with careful consideration of grids means it flips fairly easily and convincingly between portrait and landscape. Visual content is where they’ve added extras like picture galleries, a week’s worth of cartoons to enjoy, some of them with added animation that play to the strengths of displaying on a big, crisp screen. 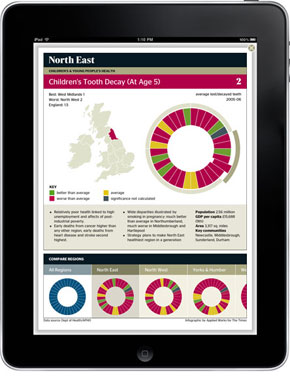 Joe Sharpe from Applied Works collaborated with The Times on interactive infographics, something they’re very keen on. He showcased three: Budget, World Cup, Health of England. Using html5, css3 and javascript. They are modular such that they work in both portrait and landscape as well as cross-platform, that is to say the website too with minimal additional work. But, they are hosted remotely so when you’re viewing a graphic you’re in fact looking at it through a webviewer so you have to have an internet connection for it to work. That said the internet connection allows graphics can have live feeds.

General thoughts on the iPad were that it’s brilliant for surfing the internet and watching TV and games, especially for kids. Compared to using a computer the iPad is a much more easy, informal, personal experience being one step closer to the conent by virtue of not having a physical keyboard and being larger.

Good things include control over typography, access back issues, great image display, the additional of interactive features to visuals eg 360 views and for better storytelling eg the transitions between frames of a cartoon.

Challenges include the fact that heavy PDFs of print content are not a solution, designing for the two orientations, navigation, knowing how far through a magazine you are (something that’s not a problem in the real world and vital to the experience of reading a magazine or newspaper).