In my experience people are either comfortable with numbers or they’re not, and it’s about as black and white as that. Which can present problems when you work in journalism.

I’ve run workshops for both designers and journalists about handling data and numbers, as well as their visualisation, and one piece of advice I give is that if you’re not happy with numbers, ask someone who is, don’t keep stum. 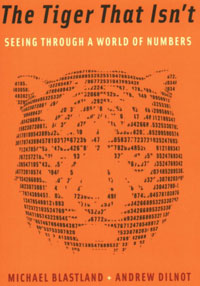 But if you’re determined to soldier on alone you could do a lot worse than read ‘The Tiger that Isn’t: Seeing through a world of numbers’ by Michael Blastland and Andrew Dilnot, the same Michael Blastland who is featured here as part of his ‘Go figure’ column for the BBC News Magazine.

And while I seem to be on a roll promoting all the BBC can offer for assisting in the better handling of numbers, More or Less on BBC Radio 4 is well worth a listen too.