Snapshot of the industry

It’s the end of March, it’s nearly spring, that means only one thing: Malofiej.

It’s hard to describe Malofiej to newcomers. It’s more like a community than a conference. This year was no different. It’s always lovely to catch up with familiar faces, and meet a few new ones too, all gathered together because they care passionately about infographics.

In the tradition of the conference there were speakers from all over the world and from hugely differing news organisations. But as ever, despite this variety, a few common themes emerged that seemed to be concerning the infografista community across its full breadth.

It’s these I’m aiming to summarise here rather than show a gallery of beautifully crafted graphics. See the links at the end of this post if that’s what you’re after. Yes, Malofiej is also an awards ceremony and so presents the chance to ogle lots of lovely work. [UPDATE: Look at Chiqui Esteban’s blog to see lots of the work]

Less noise, more story
The ability to be able to tell a story seems to have triumphed over design-for-design’s sake and technology-for-technology’s sake. That infographics have ‘matured’ was how some described it.

Multi-platform pressures
For print publications there was a common feeling of mounting pressure in the face of having to produce more work – due to re-versioning for different platforms – but within the same timeframe. That and not having the appropriate skills or tools to do this. Comparison was drawn with the transition from print to online only this time, with the extension to tablets, better results are being expected, and sooner.

Newsroom design structure
There’s some debate emerging about feature graphics versus breaking news. There’s increasing demand for the former, but you have to have enough flexibility to cover breaking news. 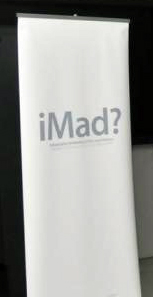 iPad: first steps
There were two clear camps: the people having a go, and those watching and waiting to see how the ones having a go get on. For those who are working on the iPad there was frustration* with the lack of robust production tools. iPads themselves were certainly in abundance in the conference hall but I had to ask myself whether this was another indication of a growing gap between the world of designers and that of their audiences?
*The ‘iMad’ branding for the conference was to reflect exactly this

Beyond news
The influence of industries beyond news organisations was cited. Often. But had no physical presence at the conference.

Does anyone know who actually looks at this stuff?
No-one mentioned metrics, audience, feedback on graphics. Some were pressed on this in the questions, none gave an informed answer. There seemed to be little awareness of how successful graphics are let alone how you might go about measuring this. While all the work was beautifully designed you sometimes wondered who the designer had in mind – a conference hall of designers, or the audience. ‘The audience’ – the very reason most of us are in a job – were notable by their omission.

The winners
There’s a gallery of the gold medal winners here. To download a PDF of all the winners scroll down to the bottom of the text box on the left hand side of this page.

And links to the gold medal winners for online:
NYTimes.com: How Mariano Rivera Dominates Hitters (Best in show)
NYTimes.com: Tracking the Spill in the Gulf
Estadão.com.br: Tapuiasaurus, the new dinosaur from Brazil

← The best of all things infographic
Simply useful →