Social media has given us a new measure of success to become slaves to: shareability. Get it right and the number of eyes on your content increases exponentially.

Like any new ‘thing’ it needs a label. From my visual standpoint I’ve heard this described as shareable nuggets. At the recent #visualDEN meetup, the inspiring Amy Webb introduced us all to her new word cardification.

I think it’s fair to say we’re all talking about the same thing, some combination of words, pictures and numbers that deliver a bite-sized piece of content.

The BBC’s new daily #bbcgofigure images are an example of a shareable nugget.

So is much of the World Cup coverage coming from Twitter’s data analysis and visualization account.

These were the most-mentioned #BEL v #USA players on Twitter during the match #WorldCup pic.twitter.com/rdrKj7lCFU

The examples above are the latest evolution in this trend, optimised in terms of both their content and design specifically for sharing. More on how you can do that at the end of this post.

A non-visual example is Vox’s “Everything you need to know about…” series. Again optimised for sharing in bite-sized chunks, there are buttons to share the whole thing, or just an individual card. 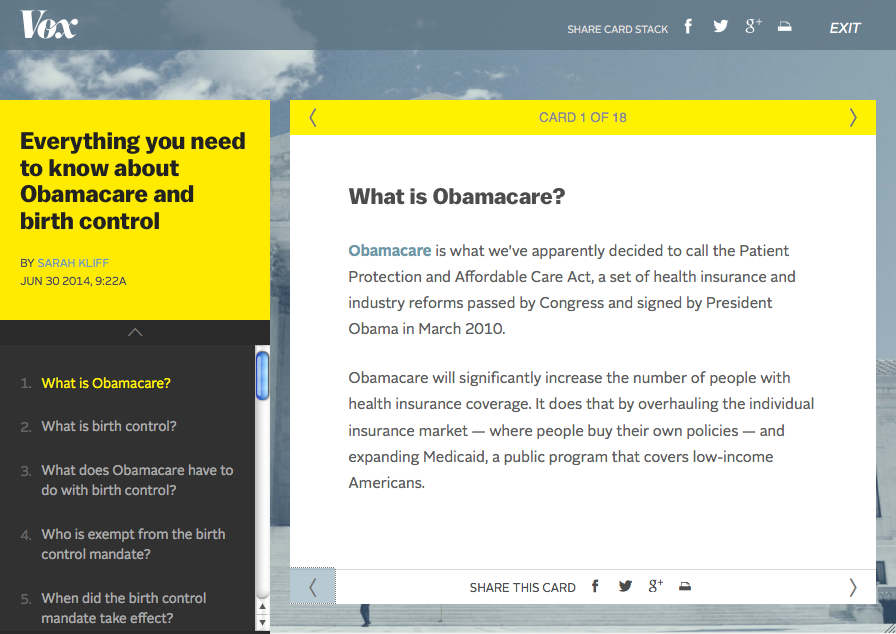 Designing specifically for sharing is the next step on from sharing graphics originally developed for use on the web or print as standalone nuggets, so getting two uses out of the one piece of content. Examples of that include The Economist’s daily charts and many of the explainer journalism sites like FiveThirtyEight.

In the battle between "Hey Jude" and "Yo Blair," @TheEconomist has a startup idea: Hey. http://t.co/XHvK1oQgPs ;) pic.twitter.com/g9ziTbC9dS

There are also any number of interactive graphics out there that give you the option, and have been doing so for a while, to share your solution or outcome on Facebook or Twitter: the New York Times’ You Fix the Budget, OECD’s Regional Well-Being results and the BBC’s The World at seven billion:

We’re going to see lots more of this, it’s a great way of sharing content and generating traffic back to your site. But the reason I’m mentioning it here is because there are some things you can do to make this work better for you, for the visual nuggets that is.

What makes some nuggets more successful than others?
If you’ve read my blog previously you might have a sense of what I’m going to say next in answer to that question.

Predictably I have the most to say about the last factor – design – and it’s probably best summed up by the idea that one size doesn’t fit all. Optimise the design for the context and you’ll get more shares.

Taking Twitter as an example, a portrait graphic with detailed text that worked great for users scrolling down a web page is never going to be legible as a picture displayed on Twitter. Simplify the key message, use bold design and landscape orientation and embed in the picture both your brand and a hashtag or URL to bring the credit – and more importantly traffic – back to you once it has been extensively shared.